The Ultimate Truth shining by the functions of all the senses, yet without the senses; unattached, yet supporting all; devoid of all qualities, yet their maintainer.

Look at the beauty of this Shloka. Guru Veda Vyasa defines the Indefinable in a language of contradiction.

We could use an analogy to illustrate this striking contradiction.

The power of the electricity is recognised when the plugged-in devices perform its task though it needs no devices to be known- it itself is so pronounced. The nature of electricity doesn’t change depending upon the devices plugged in. It doesn’t acquire the qualities of the appliances, does it? For example, the electricity is not the cold in the fridge nor the heat in the geyser. Electricity when functioning through the appliances conditioned by them gives an impression of being something else other than itself

The appliances can run faulty and can break down yet when replaced the electricity powers them the same way as it did it with the previous one. So it stays detached yet supports any appliances that come in contact with.

It is just not electricity, everything in nature seems to stand as an example of detached support. Sun and Moon, Ocean and Waves, Mud and Pot, Gold and Jewellery, Waker and Dreamer, Body and Shadow, SELF and Mind etcetera.

Similarly, the SELF functioning through the mind, sense organs and the Intellect might look as though conditioned by them but in reality, it remains unchanged yet supporting all.

The mind with the prevalent Guna(subtle nature/mood at that time) when in contact with the pure Consciousness becomes the ‘Ego’ and is the doer and experiencer. And we say-I did it.

Also, we somehow keep promoting and developing that false Ego. Will we promote the mirage in a desert to a vacation spot? Or worse still waste our whole life in keeping the mirage intact?

The above Shloka clearly states that the Self, however seeming to possess, sustain and maintain the faculties yet it is beyond them and is as detached as the Waker is to the dreamer.

Image: A mirage by Angela A Stanton 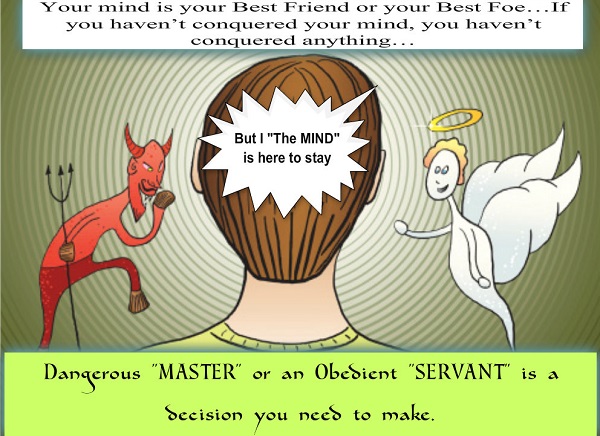 The Mind is the cause for Liberation or Bondage…It is our Mind.

How thought-provoking is this?

Who can we blame now for our problems? We had been blaming everyone and everything around for causing us problems. But the Seers ask us to observe our MIND for the bondage or liberation is in our own mind.

Who can help elevate us from its delusions?

It is we who have to decide whether to cling on to our past thoughts and let ourselves degenerate or to raise ourselves.

Who can change your thoughts? Only YOU. You only have the capacity to withdraw or engage your mind. It is an instrument which takes your ideas and turns them into realities. Don’t engage it in dangerous decadent thoughts. Choose your thoughts wisely and it will pay you well in the future.